January 23, 2007
I wrote an article for Mobile TV News recently. Here it is in all its glory...
Across Europe mobile network operators (MNOs) are mulling their options for broadcast mobile TV. Should I choose DVB-H, T-DMB, MediaFLO or something else? Is the handset range good enough and cheap enough? Should I deploy my own network or rely on a third party? Yankee Group has spent a lot of time answering these and many other important questions. However the fundamental barrier is user demand. Broadcast mobile TV is supply-driven. MNOs are desperate to develop new revenue streams to prop up flagging ARPU while equipment and device vendors are eager to sell their wares. 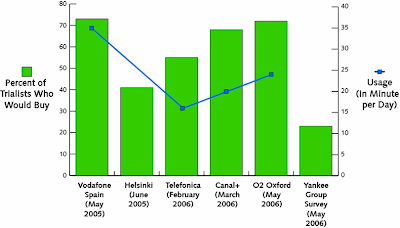 Broadcast mobile TV has one great benefit: it builds on an established value case, i.e. TV. This makes it easier to communicate the proposition and establish the value than for other new services such as ringback tones or video telephony. According to recent trials from Vodafone, Telefonica, Canal Plus and O2, approval ratings amongst trialists is between 55% and 75% (see right). Compare this with the results of Yankee Group’s 2006 European Mobile Multimedia Survey (EMMS): 23% expressed interest in mobile TV. Admittedly the trialists, unlike the survey respondents, had experienced the service. However, trialists are unlikely to represent a random sample of subscribers, typically having a higher ARPU, and many trialists will have experienced it at a discount, or even free. In the EMMS Yankee Group asked what would dissuade subscribers from adopting mobile TV. Over 80% said they were less interested (the vast majority “much less interested”) if the handset cost €400 or the service cost €15/month. High price can turn off the most ardent advocate.

The weaknesses exposed by the Yankee Group survey have been reflected in commercial deployments. 3 Italia initially reported great success, signing up 111,000 subscribers by July 11th —six weeks after launch. The success reflects the extremely appealing content on offer: the FIFA World Cup (and an Italian win, at that). Since then, no further subscriber announcements have been forthcoming. However, by October 2006, it had slashed prices from €29/month to €19/month implying a less than successful autumn and a slim chance of hitting its target of 500,000 subscribers by end 2006. Other broadcast TV services from Virgin/BT Movio, Debitel/MFD and TIM also do not appear to have been wildly successful.

The introduction of mobile broadcast TV bucks a major trend in the TV market in recent years: demand for greater personalisation and interactivity. At a time when IPTV, cable and satellite TV operators are introducing more choice, e.g. video-on-demand and time-shifted TV, mobile operators are trying to move the other way - force-feeding users a limited choice of linear programming. The mobile is an interactive and personal device, more closely resembling the PC than the TV. Increasingly, as networks and handsets become more sophisticated, users will demand access to the same services on mobile that they have on their PC. For instance, they’ll want email and IM rather than SMS and they’ll want the internet on their mobile, not a watered down ‘mobile internet’.

So the future of mobile TV is YouTube rather than broadcast. MNOs will make some money from mobile TV on the back of strong branding and better picture quality. However, to be really successful the mobile phone must deliver access to the same personalised video services that the PC (and increasingly the set-top-box) delivers. Subscribers will increasingly demand this ubiquitous connectivity to content.