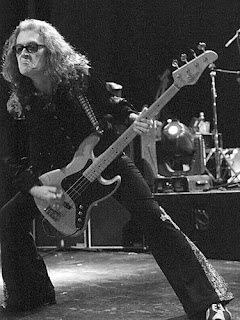 I went to see Glenn Hughes last night at the Astoria 2. As well as a corking gig, it was also quite thought provoking. Glenn's well into his 50s now but he was name checking MySpace, Facebook, the people who ran his website and suchlike. It set me thinking about the influence these sites have had on keeping old rockers rockin'. Everyone who's interested is kept up to date on gigs and so on. It generates a really strong bond between artist and fans. The relationship seems to be summed up by the title of an album by Trapeze, one of Glenn's former bands:"You Are the Music...We're Just the Band".

This also set me thinking about how this might have been influenced by the recent evolution in the digital music market. I generalise: Older, less tech-savvy and (let's face it) more solvent people buy music in the form of CDs. Young folk get it free from file-sharing sites. The result is that the music that older people like will dominate, leading to the slightly disturbing fact that there are currently three Neil Diamond albums in the top 20. But, on the positive side, the only way that many bands can guarantee to generate cash is through playing live. Hence the rash of big money reunion tours (Duran Duran, Led Zeppelin, Take That). The result is that if you can't perform live, you won't make much money. It also means that any artist that can generate and keep a small loyal fan-base prepared to pay regularly to see a kick-ass show (as I witnessed yesterday) they can keep going forever. And they can achieve this largely without coming onto the radar of the 'mainstream' courtesy of social networking and fan sites.
Now, if I could only work out who's buying all those Neil Diamond albums...