January 25, 2011
Since I'm just back from a couple of months in India I thought it might be worth sharing a European's perspective on using mobile communications in India. First off, the mobile broadband.


I picked up a Tata Photon stick in Delhi for about EUR30 including 1GB of data. The other main option was MTS but I was promised that national coverage on Tata was better. It's a CDMA 1x EV-DO product and I was intrigued to see what the quality was like. The answer is: excellent. Compared to the mobile broadband I've used in the UK the speeds were tremendous. It was occasionally temperamental authenticating to the network but once it was up and running it was delivering 3-400kbit/s which I thought was pretty good. At one point it stopped working and I called customer care to complain. It turned out that I'd used up the whole 1GB in just a few days (well, there was a whole series of The Inbetweeners to catch up on!). There was some initial misdiagnosis of the problem and a bit of miscommunication due to (according to the call centre rep) my accent being very strong. Also, if I hadn't known what I was talking about the whole process of dealing with this hitch may have been more difficult than it was.

The next issue was recharging. No-one in any of the phone shops around my hotel (and there were A LOT) seemed to know how to do it. So I headed off to Connaught Place, where all the top end shops are and where I'd bought the laptop. No-one in Croma, the electronics store, could help with top up, so I set off to find the Tata shop. I didn't find it but I did find a broom cupboard store where they could top it up with no problems. According to them any of the top-up merchants who sell Tata Indicom (i.e. their standard mobile brand) credit should have been able to do it for Tata Photon too. So either that's true and Tata needs to do some big work educating its channels, or it's not true and they need to do some even bigger work GETTING some channels. I was also glad I was in Delhi at the time. If I'd been in a backwaters it's doubtful I would have been able to manage to top up.

Top up was pricy. EUR20 for an unlimited plan consisting of 10GB of data with a fall-back to 128kbit/s once all of that was used up. That's only a smidge cheaper than it would be in Europe. But the Indian operators need to keep the price high to protect what is still relatively scarce capacity.
From then on, it was pretty much plain sailing. Indoor coverage was excellent. Even on the trains around Delhi and Agra it was great. Ditto by the sea in Goa. The only patchy bits were on the bus heading from Hampi through to Pondicherry, where we were going through some fairly sparsely populated places, and in Auroville, near Pondicherry, where I spent my last week. Apparently in the latter the service hasn't been upgraded to EV-DO so I was stuck creeping along at about 40kbit/s.


According to the friends I was staying with (who used the older generation Tata 1x service) Tata still demonstrate the usual pain-in-the-ass customer care that seems to prevail in India. That's unfortunate because the quality of the service is such that MBB should be able to establish itself as the only option for broadband, even with BSNL and others investing in fibre deployments. Good customer care should be a differentiator from state dinosaurs like BSNL, but it seems that currently it's not.

The other interesting thing was the apparent co-branding of Tata with Qualcomm. I'm not sure if Qualcomm's branding is regularly used on products and services in emerging markets, but it certainly was by Tata... 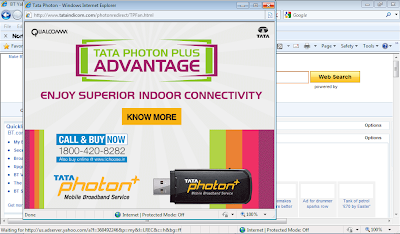