AT&T M2M success is built on semi-familiar CE. Other sectors will be more disruptive.

April 21, 2011
AT&T's Q1 2011 results are just out. The most interesting thing for me is how they're doing in their emerging devices category, which basically comprises everything that ain't a phone. As it turns out it's another good quarter and another major revenue driver. Of the 2 million net adds recorded by AT&T in Q1 2011, 1.3 million were "connected devices" (i.e. M2M) with a further 300,000 embedded computing (i.e. laptop) connections. The total for the emerging devices category now exceeds 12 million on a subscriber base just shy of 100 million.

But for me the question is always this: how does that number break down? What types of devices? What types of applications? AT&T has certified more than 1000 products and I got to check out a few of them at Mobile World Congress, and was impressed. But, how many of them actually account for more than a handful of connections?

Of the 12 million total, 3.4 million are "branded computing". Of the remainder, the lion's share seems certain to be accounted for by eReaders (particularly the Kindle) and other consumer electronics devices. When the Kindle 2 International was released via AT&T in Q4 2009 there was a very pronounced spike in the number of "connected devices" connections. 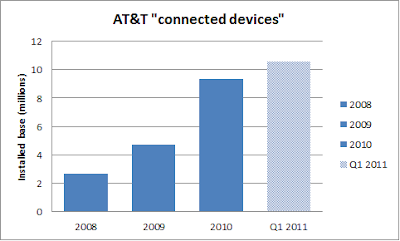 That spike during 2010 is pronounced. This, and a few other qualitative comments from various people leads me to believe that non-consumer electronics M2M makes up only a small fraction of AT&T's "connected devices". What's more, the announcement of the availability of the Kindle 3G through AT&T direct channels means there will be a further boost to the CE sector.

Why does this matter? Well, in a way it doesn't. CE's as good a segment as any. In fact ARPUs will be distinctly healthier there than in, for instance, utilities. The point is that selling a slightly different form of CE doesn't represent much of a fundamental shift from the usual job of selling phones. It's a bit different, not least in the prevailing wholesale model, but not miles away from what MNOs are used to. It's one SIM to one device. It's used by a person and with fairly predictable patterns. Carriers such as AT&T, who are ostensibly at the cutting edge of M2M, haven't had to adapt very much to take advantage of the CE opportunity. There's much more change coming and anyone at AT&T who thinks they're on top of M2M because 12% of their subs base is "connected devices" has got another thing coming.