January 24, 2019
I went to the IoT Startupbootcamp Demo Day yesterday at the Science Museum in London. SBC provides an accelerator for companies needing a push to get onto a strong commercial footing. They’ve done 3 programmes in IoT supporting 25 companies with a portfolio valuation of >EUR50m. A pretty impressive initiative, as outlined by CEO Raph Crouan in his introduction. There are seven companies in the portfolio this year, more on which later. 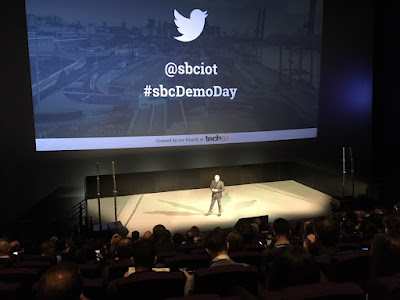 As part of the intro we were treated to a fireside chat with Jackson Bond, CTO of Relayr which is an SBC alumnus. I’ve always been a bit of a fan of Relayr, and have chatted with Jackson several times. I’ve complimented them in the past on their smart approach to how they support organisations deploying IoT, particularly around the integration of the technology with commercial models. Jackson and Relayr provided a great example of how well an accelerator can help an organisation. But only one that is also prepared to help itself. They’re a textbook example of how important it is to be willing to pivot strategy, as well as how critical it is for a technology company to become a commercial one (Jackson himself stressed the importance of building a sales function). The other important thing for me is that Relayr is a ‘platform’ company, i.e. extensible across multiple use cases and verticals. This marks out potential unicorns from niche interesting players. If I were investing my own money then I would be looking for this type of organisation. I’m not surprised they stand out as one of the success stories for SBC having sold to Munich Re for USD300m last year.

Next up we had pitches from the seven companies that make up the SBC portfolio this year. Below are my thoughts. First thing to note is that my observations are based on 10 minute pitches. For this reason, I have to add a caveat to every assessment along the lines of “I really need to dig deeper to find out what the special sauce is”. But, the idea of elevator pitches is to convey what’s so special about the organisation in a short time. So, it’s on this basis that I assess them. The second caveat is that most of these companies work in very specific niches that may or may not have 800lb gorilla real or potential competitors/incumbents of which I am not aware. No company can be considered independent of the competitive environment in which they operate. So we could preface most of them with “Assuming there’s no overwhelming competitor in this space...”.

Based on those caveats, here's what I thought:


There was a definite sense of these companies being very vertically focused. Of course the majority of companies in the IoT are applications companies, that's what the lion's share of organisations sit. But what I'm always looking for is (like Relayr) a ‘platform’ company that is extensible across a range of different use cases. I have a suspicion that many of the companies present do have technology more broadly applicable beyond the narrow example presented but they have been told not to boil the ocean. For the same reason I thought that was a good idea in Pin-IoT’s case, it’s probably wise for the other players in terms of being better suited to channels and customers. But it doesn't give the impression of being the next IoT unicorn. I’d have a better idea if I was able to get under the bonnet of some of these companies.

The other great challenge for most of these organisations is how differentiated their offerings might be. Again, without digging in and without being an expert on each individual niche it’s hard to tell how much unique IPR there is.

On balance I was very impressed with how well thought-out the presentation were, focusing on solving real world issues and getting to the nub of what the organisations do. It seems like the companies were given a structure to work to, so they were a little formulaic, but it’s still a worthwhile activity to help startups communicate the essentials in a relatively short format. Well done to everyone involved. Great venue too. And what a screen! Biggest in the country apparently.