January 22, 2019
I've been an analyst for *shudder* 20 years, and for the last couple I've been mulling over some thoughts on what I think makes a good analyst and a few recommendations for those starting out on the journey. Some things are pretty obvious, others maybe less so. Worth noting that this only relates to being an analyst. I'm sure the last 20 years has taught me a bunch of things about all sorts, but I need to keep things focused! That said, I'm sure this list could have been twice as long. Rather than being finished it was abandoned when I felt I'd spent a long time on it. As Da Vinci said, "art is never finished, only abandoned". Or maybe it was George Lucas. More pretentious quotes to come, just read on. 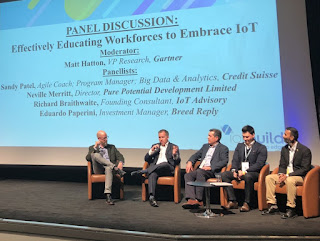 Anonymous said…
Very interesting article. I agree with most of these and, in particular, there isn't a template. Another way of putting that is work out who you are and just be yourself. The sooner you do that, the better it is for you.

After being an analyst for a long time myself here's two I would add:

Make sure you're not just an analyst all your career. When working as an analyst, I have always drawn of my experience of being in 'proper' jobs within companies. Experience in jobs where you have to make things happen in challenging circumstances is really useful.

Make sure you do something outside work where you can make a difference. A challenge faced by many analysts I have met is the concern whether they are really making a difference or being listened to. If your life is full of other interests including voluntary and charity work, you always know you are making a difference.

Carrie MacGillivray said…
Outstanding Matt! I’ve often thought of doing something like this so I appreciate your perspective. I agree 100%. Only thing I’d add is that no matter who you’re talking to (market intelligence person or CEO of a major corporation, even an airline gate agent) treat them all with respect...they all have something you can learn. We all put our pants on one leg at a time...
22 January 2019 at 16:27

Matt Hatton said…
Three more for the list from Mark and Carrie. Completely agree with all of them. Can’t believe I didn’t think of how important it is to have done a proper job. Moving from Yankee Group to work at 3 was a proper eye-opener to me and made me a much better analyst.
13 March 2019 at 12:07

Rishi Tejpal said…
Awesome... Being an analyst myself for major part of my career, I can relate to almost everything on the list. And my two cents to the hand-on experience bit. I have worked for telecom operators, vendors and then research firms. There is nothing else than hands on experience in real-life that can make you a great analyst. Thanks for sharing your experiences.
18 March 2019 at 18:10

Unknown said…
Great post Matt. I agree with everything here and always interesting to see how other analysts approach the Job! This is certainly one of the best (enjoyable, interesting, etc.) ways to earn a living that I've ever come across...
19 March 2019 at 16:32

Wireless Noodle Episode 27: To spin or not to spin?