Have millennials really pushed us to peak car? Nope.

March 23, 2019
I was reading an article in the Times this morning (“Earn £3,000 by leaving your car at home”) about how UK government could pay people to give up their private cars and use predominantly public transport. My immediate thought was that this is pushing at an open door. Surely millennials, and in future Gen-Z, are eschewing car ownership. At least that’s what the headlines seemed to scream over the last few years. So I wanted to remind myself of the degree to which millennials are giving up cars. The answer: they aren’t.

But that’s not what the internet would have you believe. I particularly love this article on Forbes that starts with “I don’t know what the actual numbers are...”. And this about how the writer’s friends would rather spend £1,500 on an iPhone than a car and how the number of young people with licences is down. Actually there is a lot of fluctuation in 17-20 year olds holding licences over time and has been for decades so it’s just a question of picking your years whether it’s up or down, although the general trend is down. At least for young people. But not for the populace at large. No evidence of a drop from the ONS stats.

The evidence to me seems to point to lower car ownership among young people (if true) not being voluntarily. Check out the chart below from Statista: if you include those who intend to buy a car with those who already own it, the generational figures are almost identical. And if you read things like this even Gen Z wants overwhelmingly to own a car. 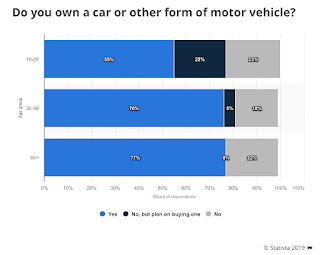 The prime determinant of car ownership is wealth. According to the Office for National Statistics the top decile of households (by income) has 93% car ownership compared to 35% for the lowest. So it seems like, as usual, the splash headlines about how millennials are different from earlier generations don’t hold up. What is almost certainly behind it is the underlying inter-generational transfer of wealth courtesy of things like high house prices, crippling student loans (versus free courses and maintenance grants just a couple of generations ago) and triple lock pension guarantees.