Have we reached peak IoT?

March 14, 2019
Yesterday I was at Smart IoT London giving the keynote presentation on “From IoT To Where?”. For those of you who couldn’t attend I thought I would provide a brief précis on what I spoke about.

I kicked off by noting that we seem to have reached ‘Peak IoT’. I blogged previously about how Mobile World Congress a few weeks ago had noticeably less IoT than in previous years. This is just one example of how the term seems to be drifting out of favour a little. There seem to me to be a couple of major reasons why we’ve hit Peak IoT. These revolve around the fact that it is both too general and too specific a term to encapsulate the things that really matter. 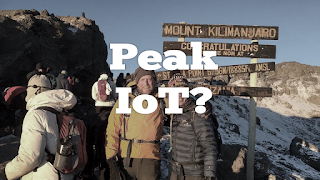 IoT has always been a useful umbrella term that includes a disparate range of technologies and verticals but it has outgrown its usefulness. The single unifying factor was that it dealt with distributed connected assets. The fragments that sat under the umbrella, such as Industry 4.0 or connected car, have become self-sustaining as they grow. As the niche grows to be meaningful it breaks away from the umbrella term. Of course the demand side rarely thought of itself as using IoT, it always thought in terms of the specific vertical use cases. The trend I’m describing is effectively suppliers moving to reflect that and the increasing size of those segments. The supply side of IoT is, if you like, following the money. For both sides IoT is too general a term

The second significant thing is that IoT is not an end in itself, it is a means to an end. And the ‘end’ has been getting more complex and involving more moving parts which are beyond just IoT. It has always only been a means to an end. If you’re anything like me you will have heard some spectacularly banal ‘wisdom’ in the technology sector. “People don’t buy technology, they buy services” is a particularly favourite. Not much to argue with, but self-evident in the extreme. Another good one is “IoT is all about the data”. Again, of course it is. It’s certainly not about complicating the product and adding to the bill of materials just to have the pleasure of slapping a zigbee (or whatever) logo on the side. The whole point of deploying IoT is to get data. The thing that has been noticeable recently is a shift in the way in which data has been used. Take, for instance, the humble smart meter. Initial deployments were about automated meter reading (AMR), i.e. a cost simple cost saving by remotely gathering data. But the models that are coming through around virtual power plants (VPP) are anything but simple, providing for the management of the relationship between generation, distribution and consumption assets.

Two things happen as we get to these more complex forms of IoT. Firstly it involves stitching together of multiple data sources and becomes multi-tenanted. As a result the application requires complex data management, of the ilk that I’ve often discussed related to Data Hubs/Exchanges/Brokers. Secondly the more complex forms of IoT tend to involve greater use of AI (or probably more accurately described as Machine Learning). Remote management naturally evolves to granting some degree of autonomy in an effort to continue improving the efficacy of whatever remote asset was connected. So IoT evolves to encapsulating way more than just core IoT elements. It incorporates data management (including lots of non-sensor data), ML, AI and so forth. Hence IoT is too specific to cover the wider use cases. If we look at things from the buyer standpoint, they typically don’t differentiate IoT from the other wider set of new technologies. In an earlier blog post I discussed how big corporations were setting up innovation units to cover issues such as IoT, AI, blockchain and so forth. But not as disparate parts, as a single set of technologies that are interlinked. At least hopefully that’s what they do.

So, IoT is too general to be useful to the specific verticals, it’s only an umbrella after all. It’s also too specific to cover the complex use cases which incorporate AI, blockchain and so forth. What seems to be happening is a bifurcation, with some of the conversation turning to more specific vertical terms, and some of it turning towards the even broader umbrella of ‘Digital Transformation’. I’ve shared my views on that particular term before .

The problem with generic terms is that they don’t really help enterprises to understand what they need to do. Rather than focusing their attention on long-range and holistic horizon scanning, providing meaningful assessment of disruption, they can get bogged down in worrying about whether they are ‘doing digital transformation’. I’ve share my views of horizon scanning before, including the need to do analysis of second and third order impacts. In addition to doing their homework properly, enterprises also need to be ready to make change. Another familiar trope from this blog.

My final piece of advice was for the suppliers. In an environment where enterprises are thinking more specifically about their vertical requirements and the results of their own horizon scanning, the focus should be much more tailored to the specific needs of the organisation, and less aimed at generic concepts such as Digital Transformation.