Why requiring a 12 month ROI on IoT projects is wrong

March 13, 2019
Yesterday I sat on a couple of panels at Smart IoT London. One was looking at ROI and the sorts of timescales that should be expected. I’ve heard a few commentators recently quoting some very specific pay-back times for IoT, typically 12 months. I have more than a few problems with this as a concept. The ROI question is much more complex than that. As shared yesterday, here’s a few reasons.

Segmentation - Requiring a short ROI for a project implies that all that is considered is the relatively low-hanging fruit. There are, of course, many such projects. Typically they are associated with streamlining existing business processes, and they represent the majority of IoT today. But more advanced and transformational projects, which involve changing the nature of the business (e.g. going from a products-based to a services-based approach) aren’t like that. They require much more organisational change. So if we just look at simple measure of short term IoT ROI we limit the opportunity.

Definition - What’s an IoT “project”? Is it nicely self-contained? Or is it a more transformational thing. If so it’s not a single project. And there isn’t a neat ROI to be measured.

Starting point - The ROI of a project depends also on how far along the organisation already is in its IoT journey. Early adoption is likely to yield quicker results than incremental improvements. Take a manufacturer of heavy construction equipment like bulldozers. Adding connectivity initially can just be used for track and trace. Low cost and probably quick ROI thanks to efficiency savings. Subsequent enhancements to that basic capability, e.g. to guide drivers on where to dig, or whatever, will probably be slower to manifest themselves.

Non-financial ROI - Many use cases don’t have an immediate direct financial ROI. Many relate to compliance or lone worker safety. Calculating ROI on that is fraught with challenges.

Measurement - An IoT project may be aimed at heading off competitive threats and remaining in the game. Some functionality becomes a hygiene factor for serious players in a sector. The ROI in that case is measured in overall market share, which can be influenced by a multitude of other factors.

Funding - What if the investment doesn’t come from the organisation itself? They may adopt a shared risk model with suppliers, as seen in some smart city deployments. If that is the case it doesn’t matter so much if the ROI is months or years. OK, it does matter because the organisation will want as quick an impact as possible, but the timeframes need not be artificially limited.

Setting strict requirements for ROI in all projects is largely only relevant to greenfield stovepiped limited use cases which are admittedly dominating IoT today, but typically the least ambitious. I will share a bit more on what enterprises should be doing in my session this morning and will write that up as a blog post tomorrow. 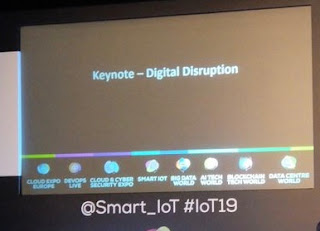