April 26, 2019
An excellent day at IoT Tech Expo yesterday. I chaired the day on the 'Developing for the IoT' track. 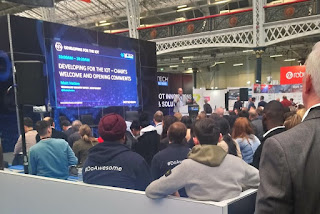 I opened by giving some thoughts on how the IoT environment has changed for developers in the last 10 years. Obviously there's not room to cram in everything that's relevant, but I provided a summary of some of the highlights. Notwithstanding of course that 10 years ago we were all talking about M2M, telemetry, OT and lots of other things that might or might not now fit under the broader IoT umbrella.

IoT software platforms have taken a lot of the pain out of developing, whereas ten years ago a lot of the software development was from scratch. Continuing the software theme, it's also worth noting that a lot of the protocols most used in IoT just didn't exist, e.g. MQTT, SoAP. In the first panel of the day (featuring Jeremy O'Donoghue representing GlobalPlatform, Dr Mohammad Zoualfaghari of BT, and David Mudd of the BSI) we discussed the importance of streamlining the device onboarding and management process and the absolute necessity of having more efficient systems in order to cope with the volume of devices in IoT, ideally zero-touch. Again, a lot of tools exist today to achieve that which didn't previously.

On the networks side of things we now have a lot of IoT-centric capabilities that just didn't exist such as the LPWAN technologies and eSIM. The challenge with networks is that we're still in a horribly fragmented world with massively varying coverage of different networks, unclear deployment plans, fragmented frequency bands and diverse plans for network switch-off. As discussed later in the excellent connectivity panel (featuring Dimitrios Spiliopoulos or O2, Neil Bosworth of Gemalto and David Boswarthick of ETSI) it was hard to escape the conclusion that now is about the worst time for developers to be making decisions on which WWAN technology to be used because of the fragmentation. Lots of brilliant tools, but a lack of clarity on what is the future proof option.

Effectively, what's changed is that rather than making do with existing technologies and cobbling together a solution, there are now much more effective and (more importantly) efficient tools.

In other ways developing for IoT has become more complex. The use cases have become more complex, moving beyond simple sensing to encompass much more transformational changes. Think of the difference between automated meter reading vs virtual power plants in the energy sector for instance. There's also much more of a requirement to do more with the data, so data management becomes a critical issue (and we had a v interesting presentation from Blaine Mathieu from Vantiq on this topic). Anyone developing an IoT app today should have one eye on data management and monetisation.

Security is, of course, a perennial issue both in consumer (where developers generally have security as a low priority) and enterprise (where the data and business processes concerned are increasingly critical to the running of the organisation). Mariana Pereira gave what I thought was the most fascinating speech of the day, talking about Darktrace Industrial and their AI-based threat detection system which mimics the immune system. Check them out if you're not familiar.

The other remaining challenge is still to bridge the gap between the world of the 'Internet' (best efforts, beta test in field etc.) and 'Things' (5 9s reliability, iterative products etc.). But that's a topic for another day.

This is a very brief summary of some of the discussions. Overall a great day.