Analyse the world - the first in a series

June 17, 2019
It’s time to analyse the whole world. Narrow-focused assessment of particular technologies and markets are just not sufficient. That's why I'm planning a much broader-based assessment of all major disruptive changes (demographic, economic, environmental etc.) that will have direct or indirect effects on business adoption of new technology. Here's why...

Over the last few years the subject of horizon scanning was a recurring theme when I discussed with client organisations what they should do about new technology. Organisations tend to have a relatively narrow view of what will affect them, as exemplified by the usual Porter’s 5 Forces, SWOT and PEST analyses. Analysis of competitive threats will tend to look at emerging issues and identify the direct impact on the organisation, as well as its clients, suppliers and the general environment in which it must operate. What they are generally bad at doing is looking at a broader set of factors, incorporating for instance technical, competitive, legal and demographic change. Furthermore they tended to ignore the second and third order impact of the trends they may be tracking.

To give an example: retail was, to a modest extent, disrupted by eBay in the early 00s. Its success was largely dependent on the arrival of PayPal as a payment mechanism. However, if you had asked retailers to assess the impact of eBay on their business model they would have tended to focus exclusively on how eBay as a technology could be used (i.e. online payments) or could disrupt what they do (i.e. not at all). To be more effective, a good horizon scanning exercise would have said: what is PayPal, what does it have the power to do, and how will that change the world and therefore have an impact on my business? I’ve written a little bit about this in another blog post.

The same thing applies to anyone analysing technology markets. There is an inevitable requirement for analysts to think more broadly. We need to give consideration to a much wider set of forces that will shape business over the next 20 years, rather than narrowly focusing on our specific niche market. Almost all technology sectors can now be considered part of an all-encompassing mass (sometimes referred to as ‘digital transformation’) where inter-related technologies transform almost all aspects of what organisations do. As part of this process, the adoption of new technology is permeating deeper into organisations’ core business. It is hard to over-stress how important this change is. The next 20 years will see most companies shift from using IT as an enhancement to existing capabilities and business practices, e.g. workforce automation, to applying new technologies to their core capabilities, e.g. factory automation, data analytics, enterprise resource planning and so forth. The transformation required becomes 80% about the non-technical issues. For instance, for a company such as Tomra which sells Potato Sorters (amongst other things), the process of shifting from selling a machine to providing Potato-Sorting-as-a-Service (PSaaS) is only a small amount about the remote monitoring technology. It’s much more about changing business model, for instance new sales processes, revised finance requirements, and different customer care obligations.

Failure to properly consider the non-technical can also lead to some comprehensive misunderstanding of market opportunities. For instance, my old stomping ground of the Internet of Things is ostensibly a technology market, but the reality is that non-technical factors are infinitely more important when, for instance, modelling and forecasting that market. To give a few trivial examples: the market for smart gas meters in Sweden is more-or-less zero because the Swedes don’t, as most countries in Europe do, have piped natural gas; in Cyprus there are no railways; in North Korea there is an enormous industrial facility at Kaesong run by South Korea; and so forth. Without specific local knowledge of non-technical issues (e.g. how many ‘things’ there are to connect) it would be impossible to model the adoption correctly. To give another example, during the early years of Machina Research we had to revise the number of cellular connections in Europe quite regularly based on the failure to implement eCall, which would have seen a cellular connection in every new car. This was not a technology or a demand issue. It was a regulatory and commercial issue.

Over the next 20 years there will be a much more symbiotic relationship between technology and business processes. As a result, analysts covering one will have to take a view on the other side and will therefore need to much better understand the context in which any given organisation is adopting new technology. As a result they will need to much better understand the business dynamics of those organisations’ sectors. However, I don’t even think this is enough. Rather than just understanding the worlds of manufacturing or agriculture or healthcare one needs to understand the global context. There are some fairly predictable macro-level changes that will happen in the world over the next 20 years (for instance related to demographics, the environment, and food production) which will have a knock-on effect on all segments.

Over the next few months, I am going to engage in an exercise. I am going pull together an analysis (and forecast) of the major global social, economic and technological changes that I expect over the next 20 years. I’m not an expert on most of these areas, so I will be mostly tracking down the most eminent sources I can find on each. I intend to do two things: (a) piece together how these changes might influence each other; and (b) look at what impact they are likely to have on organisations of different types. It will provide a canvas onto which my views of technology adoption can be painted.

For instance, I’ve been looking quickly at dependency rations (under 15s/over 65s as % of the population). Between 2020 and 2040 that is set to grow globally from about 53.5 to about 57, of which the over 65 portion will grow from 14.4 to 22.1, which tells you all you need to know about which direction the population is going. Clearly this has deep implications for the economy as a whole, with people working later in life, higher taxes to pay for long-term care for the elderly, and so on. It also has implications for specific sectors. Healthcare is one, obviously, in terms of providing long-term care. Another is education: with fewer children and longer working lives, education will need to shift to focus more on lifelong learning. Also, with fewer working age people, more automation will be required. With working age people falling quite rapidly as a % of the total population, perhaps the scare stories about job losses from automation will actually be a god-send allowing us to prop up a diminishing (in % terms) workforce. There will also clearly be economic advantages to countries with lower dependency ratios. The chart below shows UN projections for dependency ratios. Over the next 20 years, China (due to its one-child policy), Europe and US are on the wrong end of changes, India and Latin America are pretty stable, and Africa will reduce its dependency ratio considerably. 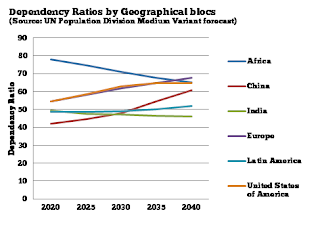 The above is an example of the starting points I will take for analysis I plan to do over the next few months, although with a much deeper dive. I thought a good place to start would be demographics and then I’ll work through something that looks suspiciously like a list of government departments: environment, agriculture, energy, housing, health/social care, transport, industry and so on. Based on this analysis I will be constantly conscious of the inter-relationship between each of these elements. The aim is to see what the canvas will be on which the technological and business environment will need to be painted in 2040 and beyond.